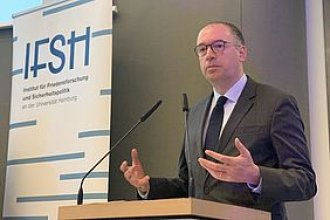 "We are currently seeing a tectonic shift in the world’s geopolitical and economic make-up that is threatening the very foundation on which the EU’s foreign and security policy has been built. Instability at Europe’s borders is a brutal, omnipresent reality creating challenges whose effects are being felt by people across the EU. European foreign and security policy must therefore change gear and massively pace up to safeguard its citizens’ security, safety and stability.

We have come here today to talk about the future of Europe, the European Union and the perspectives for a truly joint foreign and security policy to address these developments. What will and what should it look like? What are the biggest challenges? I am sure you wouldn’t expect anything else from me: my answer is an upbeat one.

There is certainly considerable scope for improvement and reform, there are shortcomings, and the way forward will be a long and winding road, with setbacks along the way. But Europe – meaning for us, first and foremost, the European Union! – still has vast untapped potential it can use to successfully shape our future.

Ladies and gentlemen,
There are conflicts and crises on our doorstep, such as those in Libya, Syria, eastern Ukraine and Yemen. We are deeply concerned about Iran accelerating its disengagement from commitments under the JCPoA. At the same time, we face great strategic challenges.

For a few years now, many scholars have been publishing books about an upcoming Asian century while writing off the US and the West as a whole. The US and China are increasingly embroiled in geopolitical rivalry. No doubt, the balance is shifting. A more assertive Russia is testing Europe. The only way to tackle these challenges is a strong and united Europe and a strong and united European foreign and security policy.

So where are we now? It is no secret that there are deficits and challenges.

Firstly, there has been a lack of a single European voice and joint capability to act in a range of crucial conflicts in the European neighbourhood: Syria, Yemen and Libya are just a few examples illustrating the difficulties in achieving consensus among 28 member states. They show that a fundamental prerequisite for the EU’s ability to act is a substantive common position among the member states and their political willingness to give the High Representative a clear mandate to act on behalf of the EU. If there is no coherent EU position and if EU member states are not prepared to accept the lead by the High Representative, which must obviously comprise a degree of leeway in the way the mandate is being implemented, the EU as a whole cannot take a stance nor act as an effective peace-broker. Moreover, in some cases, member states must also be ready to take decisive complementary action, such as the introduction of sanctions.

In practice, this means that we should work on creating a culture of greater coherence, cohesion, responsibility and trust among EU member states on key foreign policy issues. We should not immediately expect to be able to cater here for the full range of foreign policy issues in the same way. For a start, it would already be a major step forward if we identified half a dozen crucial dossiers that are of outstanding importance to the EU’s peace, security and prosperity on which the EU – under the leadership of the High Representative – could really take the lead on behalf of all EU member states, provide significant added-value and make a real difference. A key test case for the EU’s ability to act as a united and effective foreign policy actor is its success in promoting its interests and values vis-à-vis the United States and China. Another example is the Normalisation Dialogue between Serbia and Kosovo on which stronger EU leadership is needed. And finally, the EU must put major emphasis on its immediate Southern and Eastern Neighbourhood.

For this purpose, we should strive post Brexit for an unprecedented close relationship with the UK in the EUframework. If things go well, the E3 – i.e. Germany, France and the UK – could potentially serve as a bridge to maintain both: a strong constructive partnership with the UK and an effective and powerful EU foreign and security policy. But such a development is still far off and will require a smooth Brexit and prudent negotiations on the EU’s future relationship with the UK. And it goes without saying that an E3 consensus cannot replace the strong message sent by a Statement or Decision taken by 27 EU member states. Therefore, it is worth going the extra mile needed for an agreement among 28 or 27 as we have just seen when negotiating the EU Statement on recent developments in north-east Syria.

Thirdly, we also face a regrettable rise in populism in many European countries, a populism that is keen to blame Europe for all ills, even though it seems we might have reached the peak and the tide may turn against these nationalist movements. If we manage to show the added-value of the EU’s foreign and security policy in practice, we have another argument to counter narrow-minded and short-sighted calculations of allegedly national interest.

Finally, the EU’s recent refusal to officially launch membership talks with North Macedonia and Albania has been met with great disappointment. Mainly due to France’s veto we have failed to reach a consensus within the EU and have not managed to fulfil our promises to our Balkan partners who began their long journey to EU membership at a summit in Thessaloniki as long ago as 2003! Commission President Jean-Claude Juncker has called the refusal to open accession negotiations a “major historic mistake”. Indeed, this not only harms the EU’s credibility to live up to its promises, but is a setback for our strategic interest in a stable and secure region at the heart of Europe.

However, there is progress to be proud of. It testifies to our determination to stand firm on the values that bind us together and to strengthen the Union as a truly global actor, a commitment laid down in the “Global Strategy for the EU’s Foreign and Security Policy” in 2016.

We have made especially good progress on security and defence issues in recent years as we move closer to a future European Defence Union. We have launched the Permanent Structured Cooperation in the EU, in short PESCO, to interact more closely and to effectively pool our resources. We now have an EU military command centre (or “Military Planning and Conduct Capability”) which significantly strengthens European crisis management capacity through central command and control over the EU’s military training missions.

Moreover, the European Defence Fund (EDF) has been launched to foster innovation and develop defence technology that will help promote defence cooperation among companies and between EU countries. During our EU Presidency, we will open the European Centre of Excellence for Civilian Crisis Management as a service-provider for the European Union, notably for EU member states, in support of an enhanced and more effective civilian security and defence policy.

We stand firm on our common European values. Right now, discussions about a new horizontal sanctions regime are underway, that would allow the EU to list persons and entities involved in gross human rights violations worldwide and to send a strong signal that such terrible crimes will have consequences. Germany is committed to concluding negotiations on the regime, adding a new tool to our foreign policy tool-box.

I think it is important to have a realistic view of the challenges, while at the same time confidently presenting these achievements instead of overemphasising the shortfalls.

What else can we do to further bolster progress in Europe?

One of the elements hampering rapid and bold decision-making in EU foreign and security policy is that we only have very few cases in foreign and security policy in which the Lisbon Treaty foresees the possibility of qualified majority voting, in short: QMV. And in those cases where EU member states could take decisions by QMV, they are shying away from actually doing so. Therefore, again and again, individual member states exert their de-facto veto power in order to water down Statements or block decisions outright.

Germany has been systematically advocating the use of QMV and also the extension of QMV to other suitable parts of CFSP, as explicitly foreseen by the Treaty. After all, it was clear at the drafting stage that consensus-building among 28 EU member states will require additional incentives and dynamics to actually go the extra mile and reach viable consensus. If we do not manage to find such ways of injecting additional flexibility in to our negotiations, unanimity will all too often remain the winning card up the sleeve of some member states to prevent the actual use and also extension of QMV.

The use of constructive abstentions is another possibility to enable an overwhelming majority of EUmember states to take decisions. So far, however, there is only one (!) case in which a member state has made use of this possibility. Similarly, in spite of the remarkable campaign by the Commission to increase QMV, the vast majority of EU member states remains very hesitant, concerned about potential negative impacts on their vital national interests. Yet, for such cases where crucial interests are at stake, the Treaty in fact foresees an exception.

We will therefore continue pushing for the use of QMV in the framework of the Lisbon Treaty. But while QMV is one important element in increasing the EU’s ability to take faster and more effective decisions, it won’t solve all of our problems as it is only limited to formal legal acts – and does not apply to EUStatements or Council Conclusions.

Ladies and gentlemen,
We need to be aware of the fact that our Common Foreign and Security Policy sometimes touches upon extremely sensitive issues from a national perspective. In practice, we should therefore increase our efforts to create a culture of trust among EU member states on key foreign policy issues so that we can increase our leverage without making use of new procedures.

We must speak with one voice, even if we do not agree 100% all the time.

Moreover, the consensus among member states, the High Representative and the EU institutions on necessary common action to promote peace and security, resilience and prosperity, human rights and a rules-based multilateral order must evolve continuously.

For instance, we need to embark on further work on a common strategic culture among EU member states to ensure an up-to-date and sufficiently concrete assessment of the major threats and challenges and the joint commitment among EU member states to common responses. There is also an urgent need for a more “joined-up” approach to ensure a credible and effective EU foreign and security policy. Ursula von der Leyen’s new geopolitical Commission must deliver here more than ever before.

Ladies and gentlemen,
We will only be able to meet today’s challenges if we know our medium to long-term goals: A European Union which is itself democratic, acting in solidarity and showing resilience.

A European Union which enjoys ever closer and amicable relationships with its neighbours.

A European Union which serves as a central cornerstone of a peaceful rules- and value-based international order.

Having sketched out these challenges and aims, there can be no doubt: the European Union is at the core of German foreign and security policy. That is not something that is going to change."