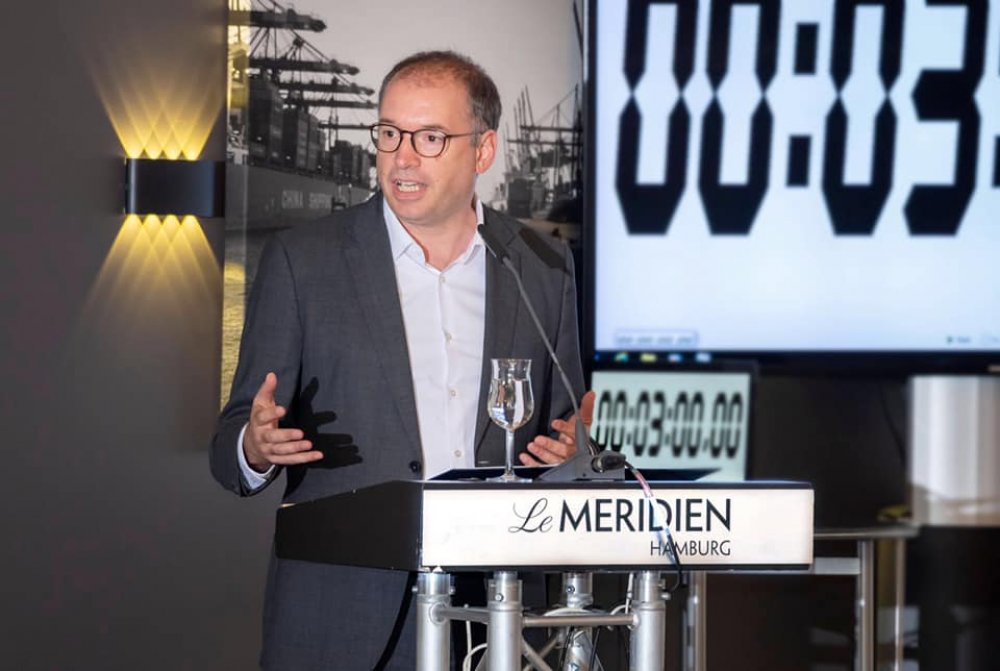 "When preparing this speech, I watched the video of the remarks made by Ronald Reagan and Mikhail Gorbachev at the signing of the INF Treaty in December 1987. It was a rare sight: The President of the United States and the General Secretary of the Soviet Union standing side by side in the White House, in harmony, proudly presenting a treaty they had been working on hand in hand for no less than seven years.

During the ceremony, Ronald Reagan stressed that with patience, determination and commitment a vital issue had been tackled despite “strong and fundamental moral differences” that continued to exist between the two nations. When Mikhail Gorbachev took the floor, he emphasised the historic value of the treaty for future generations because of its “universal significance for mankind, both from the standpoint of world politics and from the standpoint of humanism”.

Ladies and gentlemen,
I’ve always found it remarkable that in the political climate of the Cold War the two most important antagonist countries came together with a shared vision of arms reduction and signed the first‑ever agreement eliminating a whole category of nuclear weapons. It was a beacon of hope in a bipolar time characterised by threats, propaganda and all kinds of measures short of open warfare.

Today, our world is no longer bipolar. The concept of two adversary blocs seems almost straightforward compared to the geopolitical shifts we’ve been witnessing in the last decade. And although the goal of a world without nuclear weapons is even more important in these complex times, three weeks ago, on Friday 2nd, we all woke up to a world in which the INF treaty had been condemned to history. The treaty’s demise was a slow one: Starting in 2013 under the Obama Administration, the United States had raised its concerns more than 30 times with Russia before officially declaring it in material breach of the Treaty in December 2018.

There can be no doubt that the SSC-8 or 9M728 missile system developed and deployed by Russia violated the INF Treaty and posed a significant threat to Euro‑Atlantic security. The new missile is mobile, very easy to conceal and capable of carrying nuclear warheads. Moreover, it reduces warning times to minutes – therefore lowering the threshold for nuclear conflict – plus, it can reach European capitals. Let me be very clear on this: The fact that Russia – despite repeated calls to return to full and verifiable compliance – continued to develop and deploy treaty‑violating systems, led to the agreement’s demise on 2 August 2019. It is Russia that bears sole responsibility.

Ladies and gentlemen,
Where do we go from here? How do we uphold the nuclear arms control architecture when one important pillar is missing? How do we prevent other pillars such as the NPT or New START from teetering?

There is no easy answer to these questions. But two aspects should be clear:

To prevent the global security architecture from crumbling, we need to see the end of the INF Treaty as a clear wake‑up call. It is high time to fully commit once again to the vision of a world without nuclear weapons. A new era of nuclear arms races would have devastating consequences for global peace and security. So, how can we uphold what we have achieved and ensure the INF setback does not trigger a domino effect?

Ladies and gentlemen,
What we need is a clear roadmap leading us to a system of nuclear disarmament and arms control fit for this multipolar world of the 21st century. It needs to build upon what has been achieved and – at the same time – take into consideration the obvious geopolitical shifts as well as new phenomena in the defence technology sector in the last decade such as autonomous weapon-systems, cyber activities, hypersonic systems and space technology.

The roadmap should incorporate six elements:

Ladies and Gentlemen,
Questions about new developments in autonomous weapon systems, missile technology, bio-technology and cyber warfare are closely linked to ethical issues. How can we protect the inherent and inalienable right of human dignity? We have to acknowledge that non-regulated technological development in weapon systems might strike at the very heart of our constitutional values. Therefore, we have to act with due foresight!

To put the six elements I’ve just described in a nutshell: We have to

Ladies and gentlemen,
I hope we’ll face up to our responsibilities and not disappoint future generations. They will hand down their verdict on what decisions current governments took at this historic juncture.

I’m very much looking forward to what you all have to contribute to the discussion today.

Thank you very much."